The COVID-19 pandemic has had significant economic impact across all sectors of the economy. As unemployment levels continue to rise (nationally going from 5.9% in February to 13.5% in April, while provincially, going from 6.2% to 12.4%), many individuals are concerned about their financial solvency. This is particularly true in the accommodation and food services sector which saw unemployment levels rise to 35% in April.

Concern Over Finances and Economy
A recent MNP survey found that 49% of respondents were $200 or less from insolvency while a TransUnion survey found that “an overwhelming majority” of respondents were using money from their RRSPs, TFSAs, and various government support programs to meet their financial obligations. Combined with rising personal and business loan defaults (and a subsequent increase in credit risk which should prompt higher lending rates in the future), this could lead to a small reduction in homes sales as some people are priced out of the market.

Saskatchewan Real Estate Performs Better Than Expected
Despite these issues, the Saskatchewan real estate market has been relatively resilient to date. While Q1 new listings and average prices were down over last year, Q1 sales were up, comparing favourably with Alberta. The true impact of the pandemic, however, wasn’t going to be felt until April, and although activity was down across the country, it was not down as much as anticipated in Saskatchewan, and the province’s losses were not as severe as Alberta’s.

This performance also contrasts significantly from the SARS pandemic which saw transactions in some markets fall up to 72.0% and cease completely during COVID-19 in certain markets.

Evidence from prior pandemics suggests that transaction volumes return to normal relatively quickly once physical distancing measures are relaxed. With the Province beginning to re-open the economy in May, Jason Yochim, SRA CEO anticipates that “the real estate industry in Saskatchewan will likely emerge from this shutdown with only a few cuts and scrapes.” We’re already beginning to see a rise in the Bloomberg Nanos Canadian Confidence Index (BNCCI) in the prairie provinces, suggesting that while people still have a negative view about the economy, they’re beginning to feel more optimistic and that they may be willing to start spending again. 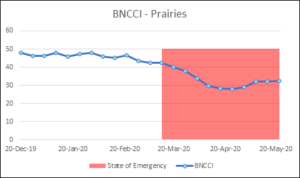 Real Estate Could Help Lead Recovery
Real estate is the second-largest sector of the Saskatchewan economy (behind oil and gas). Energy prices having fallen significantly due to reduced global demand (leading to a projected $500M to $600M loss to the economy), however, it is unlikely that the oil and gas sector will recover quickly or that it will be able to significantly help to offset losses due to the pandemic.

But with home sales producing approximately $53,000 in additional spinoff spending across multiple sectors of the economy, reducing restrictions on the home buying process has the potential to boost employment and help the provincial economy to recover from the impacts of the COVID pandemic.

“The number of employment opportunities and essential economic activities that are created when a home is bought or sold is significant,” says Yochim, “and I expect that the sales that will not occur during this pandemic will be recovered once the province has opened up again.”

With restrictions in place, people felt that the value of real estate in the prairies would fall, but this expectation is beginning to change as well. The sales-to-list ratio in the province for April was approximately 41 percent suggesting balanced market conditions, while inventory was at 13 suggesting that markets favoured buyers. The high inventory level, however, is due to the small number of sales, and as price expectations return to normal and buyers become more confident, sales activity should increase and bring inventory back to normal levels. Low interest rates may also encourage potential buyers to enter the market.

Although only 28.3% of people expect real estate prices to increase or remain the same (down from 61.9% prior to the province declaring a state of emergency), according to the Nanos Bloomberg Future Value of Real Estate survey for the prairie provinces, price expectations are now remaining relatively steady. As the province continues with its re-opening plan and consumers become more confident about the economy in general, we expect that real estate activity will return to normal.

Agriculture (the third largest sector in Saskatchewan) may also help to boost the provincial economy but faces certain challenges that may hamper its growth. Livestock producers are currently facing supply chain issues which could threaten their bottom lines. In general, producers are expecting lower commodity prices which could lead to lower revenues and cash flow.

Temporary foreign workers also face travel restrictions which could result in insufficient labour for producers. Finally, with over two million acres of unharvested crops from 2019, producers may not be able to salvage those crops and be forced to seek compensation through crop insurance programs.

Although we’re still feeling the impacts of COVID-19, the real estate market in the province is already showing signs of recovery. Average prices continue to be down (as expected) but are starting to reflect prices seen last June. Similarly, while new listings and sales both took a large hit in April (when we expected to see significant COVID-related declines), both are already nearing the levels seen last May. As the province continues to re-open the economy and people regain their confidence, it is quite likely that new listings and sales will return to their pre-COVID levels. 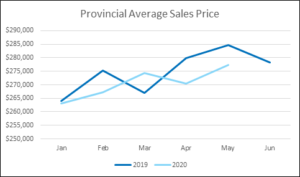 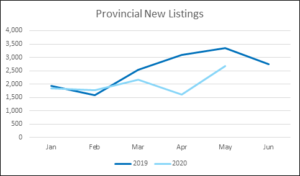 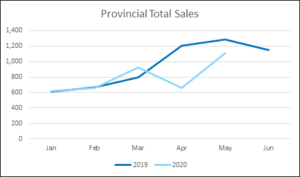 Source:SRA
The SRA continues to work with government to ensure that effective health and safety measures are in place to protect customers and REALTOS® as they continue to buy and sell homes. In mid-March, the SRA mandated that open houses were prohibited, and the rest of the country followed that lead. Now that the government of Saskatchewan has set a date for phase three of The Re-Open Saskatchewan Plan, the SRA feels confident that open houses can begin again safely.

“I’m really impressed by the performance of our members during these times…they’ve gone above and beyond to protect those buyers and sellers who really needed to move or find a home,” said Jason Yochim, SRA CEO. “Many of the measures that will be in place are already common practice for those times when a buyer really needs to see a home before they make a purchase, so our members are well-prepared to manage a visit safely.