Last week, BNN Bloomberg released an interview with David Rosenberg where he suggested that the current Canadian real estate market “[may] be one of the biggest bubbles of all time”. Citing rising housing prices with little to no income growth and an increased unemployment rate due to COVID, Rosenberg feels that the recent run-up in housing prices has been pushed beyond sustainable levels.

While it’s true that on average, house prices in Saskatchewan rose 1.9% year-over-year in 2020 (compared to almost 15% in Toronto), prices had been steadily declining since 2015. In this context, the modest increase in prices—despite higher unemployment (primarily in those sectors where it was harder for employees to work from home) may simply be a sign that housing prices are better aligning with the existing mismatch between the supply of and the demand for housing. 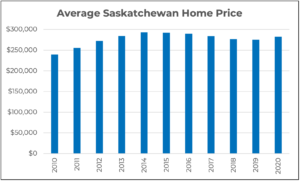 Similarly, while it’s true that a house (or any other property for that matter) can be treated as an investment, it’s a mistake to think of our homes as a [short-term] investment. Although we’d like our houses to be worth more when we sell them than we bought them for, our homes are much more than a financial asset—they’re the spaces where we live our day-to-day lives, where we retreat at the end of the day, and where we make some of our greatest memories with our families.

Although Saskatchewan’s real estate “market” has certainly been strong and seen prices rise, this increase is due, in part at least, to falling inventory levels and increased demand after years of falling prices and low demand. And with mortgage rates at such low levels, now is the time to buy a home that meets your current and future needs, and not worry about the shorter-term price fluctuations.

And because real estate is highly local, a REALTOR® can help you make even better sense of what’s happening in a specific market and find the best home for you.